A Real Blog Entry! Vibrators and Awards and Santorum and Art! 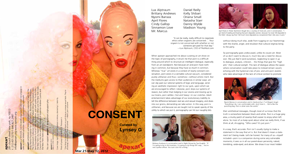 Ok, guys, I'm going to attempt to do a semi-real post! I have about an hour of time and a computer at my disposal! And there are a few things that MUST be mentioned:

1) I am getting a REAL website! It should be up by the time the art show opens on Wednesday and I am SO excited! Right now it'll be mainly a work in progress, but it will tie together my many writing names, publications, art projects, and other sundries under one domain: lynseyg.com. Pretty exciting!

2) Consent is almost ready to go, and you guys, it's going to be amazing! The art space has been turning away dozens of people a day who arrive hoping to see it, since they're still installing, we've got some MAJOR art and mainstream press attending the opening, and I am a huge ball of nerves. But I'm so proud. I really believe that this show, which may just be the beginning of a larger project, is an important step toward sex positivity with regards to pornography--it will pull in artsy types, mainstream press, and people who never have even considered porn as a serious topic, and ask them to think about it. Really think. I'm so stoked! If you can make it out to the opening, please do--and wear your most outrageous outfit! It's free and open to the public, AND there's booze! There will be an after party at M1-5 bar around the corner afterwards.

3) Before the opening, I am going to chop most of my hair off.